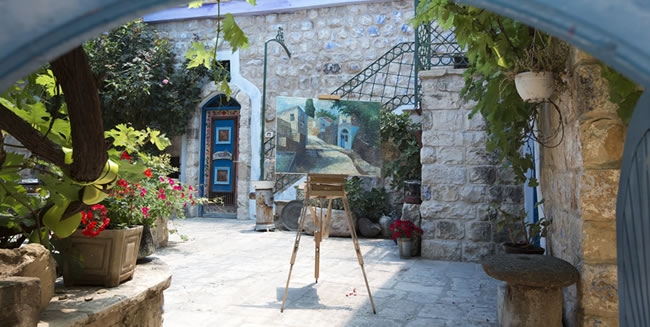 Safed is a lovely old Jewish city, with cobblestone streets, old synagogues, interesting alleys and an artists quarter. It is a hilltop town that should be visited while you are in Israel. Safed is where Kabbalah started so you can feel the mysticism when you walk the streets. At 900 meters above sea level, Safed is Israel’s highest altitude city, nestled in the mountains of the Upper Galilee.

Legend has it that Safed was founded by a son of Noah after the Biblical Flood. According to the Book of Judges (1:17), the area where Safed is located was assigned to the Tribe of Naphtali. It has been suggested that Jesus' assertion that "a city that is set on a hill cannot be hidden" may have referred to Safed. The city is also one of the four cities holy to Judaism, the others being Jerusalem, Hebron and Tiberias.

The ancient city boasts at least 2,000 years of history, and is first mentioned by Josephus Flavius (1st century CE historian) as being one of the Jewish settlements where signal torches were lit to mark holy days and the beginning of each month as well as a center for Kabbala sages. Safed was occupied during the time when the 2nd Temple of Jerusalem stood, and a city that has been continuously occupied by various people and communities throughout the centuries. Safed has been dealt many blows by fate; battles, earthquakes, epidemics, and yet it still survives.

Safed’s picturesque alleyways, historical sites, mystical synagogues, along with the pleasant, cool climate and the impressive views which surround it, combine to make this an attractive city to visit on your leisure time- the city is not a regular Christian Israel tour stop and you will need to make additional travel arrangments to visit the city on your own. Some of the top things to do in Safed include visitng The Ashkenazi HaAri and Abuhav Synagogue, walking in the Old City of Safed, visiting the Olive Tree Fine, Sheva Chaya, and Yom Tov art Galleries.

More in this category: « Visit The Vatican Museum on our Tour to Israel and Rome Tour to the Western Galilee of Israel »
back to top