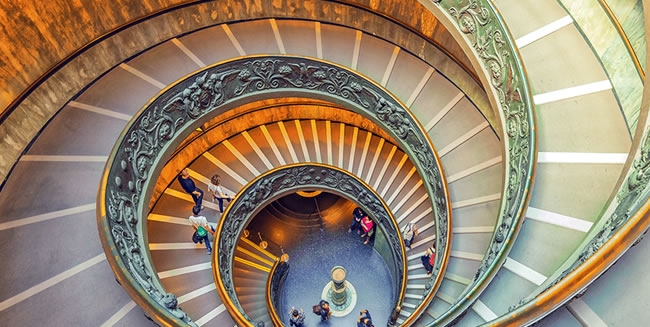 Visit The Vatican Museum on our Tour to Israel and Rome

Established by Pope Julius II in the mid sixteenth century and augmented by pontiffs throughout history, the Vatican Museums; in the Vatican City State offers one of the world's greatest collections of art. The Museum Art exhibits, which are shown along 4.3 mi of corridors and halls, feature everything from Egyptian mummies and Etruscan bronzes to old busts, historic masterpieces to modern sculptures and paintings. While touring the museum some highlights include the Museo Pio-Clementino, a stunning collection of classical statuary, rooms with frescos by Raphael, and the famous Sistien Chapel, painted by Michealangelo.

The Vatican Museum is lavishly decorated. The vast complex consist of 2 palaces – the fifteenth century Palazzetto di Belvedere with two large galleries, and the original Vatican Palace closest to St. Peter’s. Inside the complex are three large courtyards: the Cortile della Biblioteca, the Cortile della Pigna, and Cortile del Belvedere. The museum is so large you’ll never be able to see all of it in one day.

Museo Chiaromonti and Braccio Nuovo
The Museo Chiaramonti is a long hall with thousands of statues and busts that goes down the east side of the Belvedere Palace. Close to the end of the hall, is the New Wing, which features the famous Niles as a reclining god covered by babies.

Museo Gregoriano Egizio (Egyptian Museum)
Established by Gregory XVI in 1839, this gallery contains pieces taken from Egypt by Romans. The collection is not very big, yet there are intriguing displays, including a partial statue of Ramses II, a strikingly painted sarcophagi dating from around 1000 BC, and an Egyptian mummy.

Museo Pio-Clementino
This amazing historical center contains a portion of the Vatican Museums' finest classical statuary, including the Apollo Belvedere and the first century Laocoön, located in the Cortile Ottagono (Octagonal Courtyard). However before entering the courtyard you’ll see the 1st century Apoxyomenos, a sculpture figure of importance being one of the earliest known sculptures with a raised arm. The Museo Pio-Clementino also is home to the famous Bramante Staircase, the two staircases in the Vatican Museums; the original stair, built in 1505 and a modern equivalent, from 1932.

Entering the courtyard and to the left is the Apollo Belvedere, considered a masterpiece of classical sculpture. Nearby you’ll find the Trojan priest and his sons in a battle with sea serpents. Going back inside the gallery room, is the Sala degli Animali (Room of Animals) filled with stunning mosaics and sculptures of many creatures. Proceeding on, is the Sala delle Muse, centered on the Torso Belvedere, one more of the gallery's must-sees. A part of a Greek muscular sculpture from the first century-BC, this was found in Campo de' Fiori and utilized by Michelangelo as a model for his nude male paintings in the Sistine Chapel.

The following room, the Sala Rotonda, contains various giant statues, including an overlaid bronze Hercules and a stunning floor mosaic. The gigantic bowl in the focal point of the room was found at Nero's Domus Aurea and is made out of a solitary piece of red porphyry rock.

The Map Gallery - Galleria delle Carte Geografiche One of three galleries in the upper floor – the other 2 are the Galleria dei Candelabri, and Galleria degli Arazzi (Tapestry gallery) is a long corridor of 120m with 40 sixteenth century geological maps of Italy.

Museo Gregoriano Etrusco
At the highest point of the eighteenth century Simonetti staircase, the Museo Gregoriano Etrusco contains ancient rarities uncovered in the Etruscan tombs of northern Lazio, and in addition a sublime accumulation of vases and Roman artifacts. Quite compelling is the Marte di Todi (Mars of Todi), a dark bronze of a warrior dating to the late fifth century BC.

Raphael Rooms
These 4 frescoed chambers, were Pope Julius II's private lofts. Raphael painted the Stanza della Segnatura from 1508– 11, and Stanza d'Eliodoro from 1512– 14, while the Stanza dell'Incendio (1514– 17) painted on a ceiling, and Sala di Costantino (1517– 24) featuring a huge fresco of Constantine’s defeat of Maxentius, were completed by understudies following his plans.

The first room painted by Raphael, The Stanza della Segnatura, was Julius library and study room, and this is where you’ll find Raphael’s best masterpiece, La Scuola di Atene, featuring scholars and philosophers gathered around Aristotle and Plato. The figure sitting down on the steps is said to be Michelangelo. Raphael also made a self-portrait on the painting and you’ll find him on the lower right corner – second figure from the right.

Sistine Chapel
Home to two of the world's most celebrated masterpieces – Michelangelo's roof frescoes (1508– 12) and his Giudizio Universale (Last Judgment; 1536– 41) – the Sistine Chapel is the one place everybody needs to see, and on a bustling day you could wind up sharing it with up to 2000 visitors.

Michelangelo's ceiling mural design, focuses on the nine roof boards portraying Biblical stories from the book of Genesis. The ceiling can best be seen from the house of prayer’s main entrance, and the surface covers the entire 800 square meters.

The chapel’s walls also feature superb painted frescoes from 1481–82 by a team of Renaissance artists, including Ghirlandaio, Botticelli, Luca Signorelli, Pinturicchio and Perugino they represent events in the lives of Moses and Christ. Highlights include Temptations of Christ by Botticelli’s and Perugino’s Handing over of the Keys.

Besides the Sistine Chapel providing an amazing collection of priceless art and masterpieces, the Chapel also functions as the place where future popes are elected by the conclave.

Our cultural Holy Land Vatican tour gives you the privilege of skipping the line. The museum is so large, that despite exhibits being well labeled it’s highly recommended you tour with a professional guide in order to make the most of your visit. The museum galleries are also outfitted for disabled guests and those on wheelchairs, and children are also welcomed with strollers if parents wish to bring them.

More in this category: « Travel to Israel and Visit Beersheba
back to top