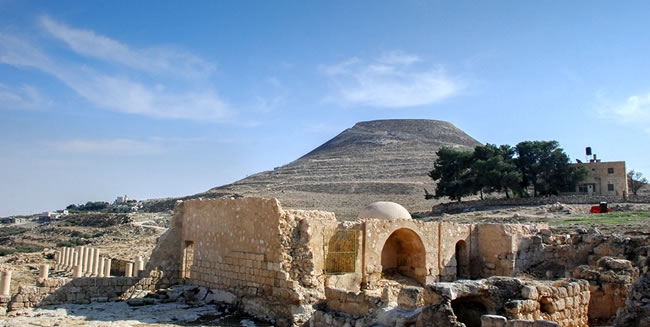 "It was strong and fit for such a building. It is a sort of moderate hill raised to a farther height by the hand of man, till it was of the shape of a woman's breast. It is encompassed with circular towers, and bath a straight ascent up to it, which ascent is composed of steps of polished stones, in number two hundred Within it are royal and very rich apartments, of a structure that provided both for security and beauty. About the bottom there are habitations of such a structure as are well worth seeing, both on other accounts, and also on account of the water which is brought thither from a great way off, and at vast expense; for the place itself is destitute of water. The plain that is about this citadel is full of edifices, not inferior to any city in largeness, and having the hid above it in the nature of a castle." (antiquities of the Jews, Bk 15, Chap. 4).

And it is true, at the top of the hill there is a unique circular structure and truly amazing not only in the Holy Land but in all of the known ancient world. Around this structure, whose circumference is 206 feet, the builders threw down the debris which gave the hill its cone shape (like a breast), visible for miles. This complex served both as a magnificent palace and a mighty fortress. The builders assured a steady supply of water by means of a special aqueduct that began in the area of Solomon's Pools and reserves. The palace was 6 or 7 stories high, surrounded by 3 semi-circular towers and one huge circular tower with a circumference of about 59 feet, of which only the foundations, which are for the most part sealed off, remain today. Inside the complex stood Herod's stunning private villa, which included a large reception room, halls and living quarters, as well as a amazing bath house. At the base of the hill Herod built the lower city, which included a large palace, a big pool, an extensive monumental building and a path that was meant to be used for Herod's royal funeral. The Herodion fortress looks out onto the desert but is within view of Jerusalem, and became Herod's most magnificent palace, serving as his last resting place and monument. It goes without saying this was one of the grandest palaces built at the time in the Roman Empire. After Herod's death the site was used only two times, during the Great Revolt (66-70 CE) and the revolt of Bar Kokhba (132-135 CE), by the Jewish fighters who rebelled against the Romans. In the Christian Byzantine period it once also became an important center. The 3 churches that were built here were decorated with mosaic floors that have been uncovered in archeological excavations. Herodion was deserted about the time of the Muslim conquest in the 7th century and remained abandoned until it was rediscovered in the 5th century. The first traveler to mention the site was a Dominican friar, Felix Faber (1483), who connected the remains he saw here to a story that was widespread in those days among Christians. It told of a group of frank knights (known as the Crusaders), who fled to this spot after Jerusalem fell to Saladin in 1187. For this reason Herodion was also known as the Mountain of the Franks. From the nineteenth century until the present, Herodion has become a focus of archaeological excavations and intensive research. Recently, a surprise assault system from the Bar Kokhba period was found in Upper Herodion. It includes water cisterns, tunnels and hidden apertures for sneak attacks — all witness to the great ingenuity of its builders. In 1998 these impressive tunnels were opened to visitors. Extensive development plans for the site have recently been drawn up. Should they be carried out, Herodion will become one of the most fascinating and interesting sites in the country.

More in this category: « Travel to Haifa during a Holyland tour to Israel Tour to the Western Galilee of Israel »
back to top