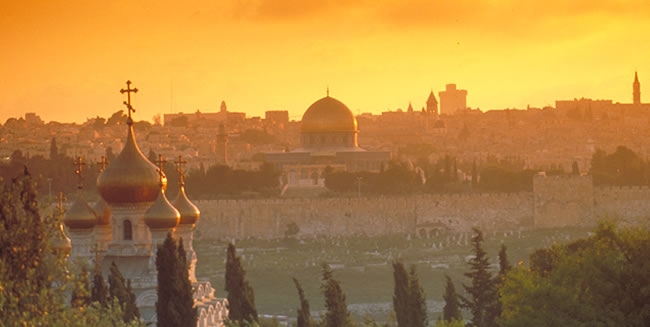 For then 3000 years since the time of King David, Jerusalem has been set above from other cities. No other place on earth has been so central to man's dreams and aspirations. No other city is described with so much love and devotion, and no other city has been subject to so much killing and bloodshed.

For Christians, Jerusalem in the life of Jesus gives it great meaning. Jesus was brought to Jerusalem as a young child, to be presented at the Temple (Luke 2:22) and to attend festivals (Luke 2:41-52). According to the Gospels, Jesus healed and preached in Jerusalem, especially in the Temple courts. An account in the Book of Mark (Mark 11:15) relates Jesus' cleansing of the Temple by chasing various vendors out of the sacred precincts. At the end of each of the Gospels, there are accounts of Jesus' Last Supper in an "upper room" in Jerusalem, His arrest at Gethsemane, His trial, His crucifixion at Golgotha, His burial and His resurrection ascension.


"On the holy mount stands the city he founded; the Lord loves the gates of Zion more than all the dwellings of Jacob. Glorious things are spoken of you, 0 city of God. (Psalms 87:1-2)

In Christianity, the Jewish connection with the city is considered as the account of God’s relationship with His chosen people – the original covenant - and the essential prelude to events narrated in the New Testament, including both universal commandments (the Ten Commandments) and those specific to Judaism, the "old order."

In medieval Christian thought, Jerusalem was considered to be the center of the world (Latin: omphalos mundi, Greek omphalos), and was represented in various medieval maps this way. Byzantine hymns speak of the Cross being "planted it center of the earth," and the imagery is tied to the concept of the Death and resurrection of Jesus being for the benefit of all humankind. Medieval maps of Europe usually placed the East ("orient” Jerusalem) at the top, and this placement on the map led to the use of the term ''to orient" to mean aligning a map with actual compass directions.

The appeal of Jerusalem has not diminished over the years. The city spreads in grand splendor across the Judean hills, reaching up to the heavens attracting multitudes of pilgrims of all faiths and all nations. Jerusalem is the holy city. A city of the spirit and the soul, where the voice of God can be heard whispering in the ancient stones.

Pilgrims to Jerusalem experience a deep spiritual moving journey. It is a visit unlike no other with enormous historical and religious content. At minimum three or four days are necessary to see the holy sites, and it’s also recommended you have some leisure time to wander in the market places and the narrow streets of the holy city.

Jesus visited Jerusalem several times during His lifetime, and the events of His final visit to Jerusalem, which occurred during the fateful week of Passover in the year 30 AD, led to His crucifixion. The places marking His triumphal entry, the Last Supper, the Gethsemane arrest, the Betrayal by Peter, the final passage along the Via Dolorosa and the execution and burial are maintained by Christian communities of different denominations. Over the centuries churches have been built and rebuilt on or near them, and periods of history are layered one upon the other, making the city a true living museum.

Hundreds of thousands of visitors are drawn every year to this church, which has been a place of worship almost constantly for nearly 2000 years. The first Jerusalem Christian community worshiped here until at least 66 AD (when it became impossible to do so), despite the fact that around 42 AD the site was included within an expansion of the city walls. Although it had been incorporated into the city, it was not built upon, suggesting the acknowledgement and acceptance of its role as a place of devotion and worship. Emperor Constantine was responsible for building the first real church on this site, and since then there have been many layers of building and development, especially in the Crusader period. Today's church is vast, and encompasses the sites that are believed by many to be the locations of both Golgotha and Christ's tomb, especially the site of Jesus' tomb, which is housed in the Rotunda, a building within a building, under a great dome. A small entrance takes visitors into a central chamber, known as the Chapel of the Angel, from which there is another even smaller entrance into the place of Jesus' burial - a place revered as the most holy spot in the world by many Christians. It is a tiny, marbled area, only large enough to hold two people at a time, and sometimes the wait on line can take time.

As a city holy to the Christian faith, Jerusalem can also be proud of its many other historically significant churches. In addition, 15 monasteries are scattered about the city, mostly in sites of particular significance - such as the Old City, the Valley of the Cross (where, it is said, the olive trees grow from which the wood for the "true cross" was taken), and others. There’s so much to see and experience on a trip to the holy city of Jerusalem. No Christian tour to Israel is complete without staying some days in Jerusalem.

More in this category: « Madaba is One of the Most Memorable Holy Site Destinations on our Christian Tour to Israel and Jordan Discover Jericho and travel the Route of the Good Samaritan from Jerusalem to Jericho »
back to top